A Word In Season

Isaiah 42:9 says: “Behold, the former things have come to pass, and new things I declare; before they spring forth I tell you of them.” At the time these words were uttered, everything God had spoken to His people through the mouths of Prophets had been fulfilled. Now they were being told something new. God was preparing them for the coming Messiah who ultimately would bring justice to the earth, and all nations to the worship of Himself. God’s word would germinate in the same way as the seed of a plant germinates but cannot be seen until it grows and brings forth its buds. It would spring up like grass does from the earth.

Why did God convey what He was going to do so far in advance? He shared His plan so that people could make themselves ready for the occasion, walk-in expectancy, and then recognize that, unlike men, He is true to His word and can be completely trusted.

God continues to speak today through the written Word, and by His Spirit within, as well as through a prophetic voice confirming His plans and purposes. In the recent past, God spoke the following word to me for a declaration… 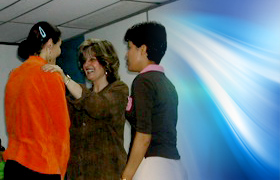 Gone are the programs made of flesh
I am staging something fresh –
The world will see, close and afar
Who I am and who you are.

Bending, shaping, molding, making
A cast that will set the earth a quaking –
Script is written, roles are assigned,
The curtain is lifting, don’t fall behind.